I woke on Monday morning to Tato (Paula’s cousin), Alsides and Cruz Elena draining out the fishpond. The fish were all being sorted and put into big buckets. I was told later that the big ones were going over to Alejandra’s and Nelson’s to be cooked and served at Las Palmas. The shallow pool out near the billiard cabana was then filled and the small fish put in there.

I left them to it and wandered down to the site.

The stairs for the house were giving Paula some grief. She was keen to have them cantilevered from the earth bag walls. Being the overly cautious person that I am I would be inclined to only pursue it once I had some engineering calculations to ensure they’d be strong enough for the potential weight of the likely foot traffic. Paula was also trying to work out the position of the stairs to ensure they gare access at the right spot.

Paula had received news from the Council that the plans were ready for collection so she headed to Tamesis in the afternoon. Alas, it looked like some more paperwork was required to gain the approval. It was all still showing the original construction – Paula planned to submit revised plans reflecting the current structure before the final approval was given.

The duck must have been feeling a bit lost with the change in pond because that night as I was preparing tea it decided to waddle up the steps and into the living room. Alsides, Cruz Elena and Valentina must have all been wondering from the back house who it was I was talking to as I was trying to shoo it out!

The English class on Tuesday had some more guys turn up. I was disappointed more women hadn’t turned up but on my way up to the library I’d passed a couple of women from the previous class waiting for something at the school so perhaps they’d be back the next week. I was still pretty happy that anyone was turning up!

I’d mentioned I would be away for a week and with that some of the adults requested an extra class – Thursday it was.

I went off to Tamesis in search of some cheap work pants – the mosquitos had me beat so I had been wearing my one and only good pair of travel pants on the job! I  finally had the honour of being the poor person in the middle of the front seats in the taxi ride back to Palermo. Let me just say it was a much more comfortable ride with the handbrake off – the driver was a tad embarrassed when we stopped for petrol and he had to reach for the handbrake again!

Great roll up for both kids classes in the afternoon. They were all very enthusiastic and asking me lots of questions about me and Australia. They were asking me what my favourite food was and with that I explained I was vegetarian – a group ‘ooooooo’ ensued.  Pretty rare in this meat loving country!

The caretakers at Las Delicias, Alsides and Cruz Elena have been really good to me while I’ve stayed up at the house by myself. They had recently asked to borrow a very small amount of money for a week. I really feel for them living week to week but I was glad to be giving Valentina and Cruz Elena the English classes at home as I knew they couldn’t get to the classes at the library. We’ve come to trading food. They give me produce from the property – lemons, plantain, guanabana and I give them things bought from town like eggs and milk. I wish I could think of a way to help them more.

That afternoon Andrea’s mum sent a plate of dessert to me in thanks of Andrea’s English lessons. I had no idea what it was. Guanabana (a popular fruit) was mentioned by Andrea when she dropped it off but I could only pick up coconut flavour. It was certainly sweets night as Cruz Elena also delivered a dessert that evening – creamed rice, one of my favourites!  I was certainly being spoilt up on the hill!

As I left in the morning I noticed the two dogs and cat resting in the shade as the turtle wandered past – much to my surprise they seemed to all be living in harmony.

I had decided that it was probably time for me to shift down to Palermo. The gnawing rat in the ceiling seemed to be getting closer to breaking through and I wasn’t quite ready for that experience. I knew I’d miss the peace, tranquility, constant birdsong, the beautiful vista and Cruz Elena, Alsides and Valentina but I also knew I wouldn’t miss the resident bathroom bat, the incessant insects and the duck going off at 5:30am every morning!

I was in two minds about whether I’d miss the hike up. While it was a hard slog it was hopefully helping to balance the potential weight gain from all the food I was trying and the refreshing cervecas! I had been very grateful to Paula’s cousin, Tato, for letting me stay there.

I was continuing to feel a little useless at the site. The guys were getting paid around 50,000 pesos a day ($25) so I wasn’t really saving Paula a lot by helping with the earthbags and if the advice wasn’t value adding I figured my presence was probably not really needed. I’d done some research on Providencia Island so that was looking like my destination for the next week.

Palermo’s streets were being working on so water was being turned off at certain times each day. Of course you weren’t told when it might be! Las Delicias with its water fed from natural springs was looking like a better option after all.

I could hear announcements from Palermo church that evening that contained the word “agua” but I had no idea if they were  announcing they now had the water on or when they might get it again.

Friday seemed to come around very quickly. I’d been unable to get the flights I wanted to Isla Providencia so I had to put that on hold until after the upcoming trip with Cliffy.

Paula had arranged for drinks with the work crew on the Friday night. It was fun having a dance with Jaime and Humberto. Negro didn’t show up, which was surprising.

We extricated ourselves from the work crew after a while to find ourselves drinking at a bar (well a door) at the back of the bar – I didn’t even know it was there. We spent a few hours drinking with our new friend Juan Nicholas and his young sons. Paula was taken by their horses (they’d ridden in from their finca about 6kms out of town) so of course ended up going for a ride.

I spent most of Saturday just chilling so when I woke on Sunday I felt I needed to do something. Emelio from my English class had invited me to his spa, Vitall, so I decided to visit. Popo took me down there in the tuk tuk and I was greeted with kisses from Emelio and his assistant Carmen. They told me the program for the day … I had understood sauna, piscina (pool) and something to do with tierra (I was thinking mud).

I was very close. I joined a couple who were staying at the spa (teachers from Medellin) for some pranayama breathing meditation in the sauna (with the occasional spray of cold water from Emelio). We also did a bit of reflexology and shoulder and back massage on each other.

We were then moved to the pool for a bit of Aqualates and chakra alignment. We were encouraged to do some deep breath sinking in the pool before being led out to an area under the palm trees for a coating of mud! After the removal of the mud we were fed a delicious meal before adjourning to the hammocks for an afternoon siesta.

Emelio showed us the Finca he owned across the road and the land on which he was hoping Paula could help him construct some earthbag houses. What a day … glorious!

When I got home Paula told me the news that Negro had decided he didn’t want to work on the project any more  Paula was a little relieved as he’d been a little troublesome the last couple of weeks – doing stuff the way he wanted rather than as per Paula’s instructions.  She thought she had someone to replace him so that was a relief as the job really needed at least three full time workers on it.

I headed up to Las Delicias with Popo. Surprisingly it was just the two of us in the tuk tuk for a change. You know what that meant – it was me out to push this time! I found the house a mess with Elkin’s son and his friends having had quite a party over the weekend. They’d gotten into my vodka, my door lock had been fiddled with and they were helping themselves to my food so I was glad I’d gone up there. It was another long weekend so they’d be gone on the Monday…deep breaths! 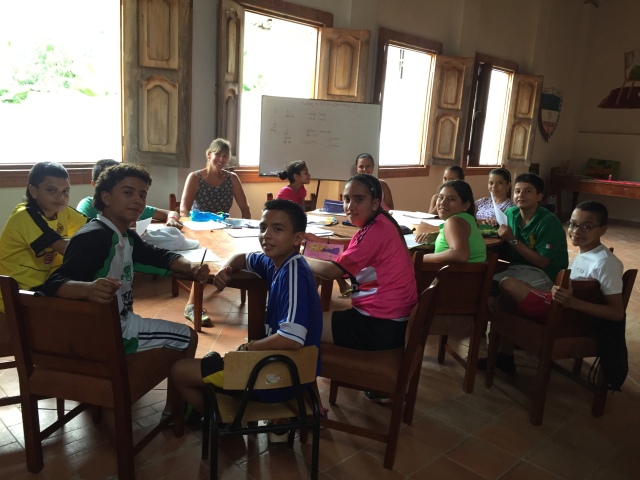 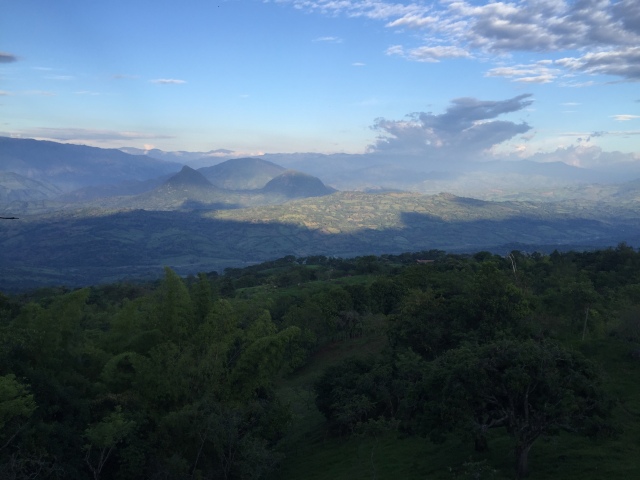 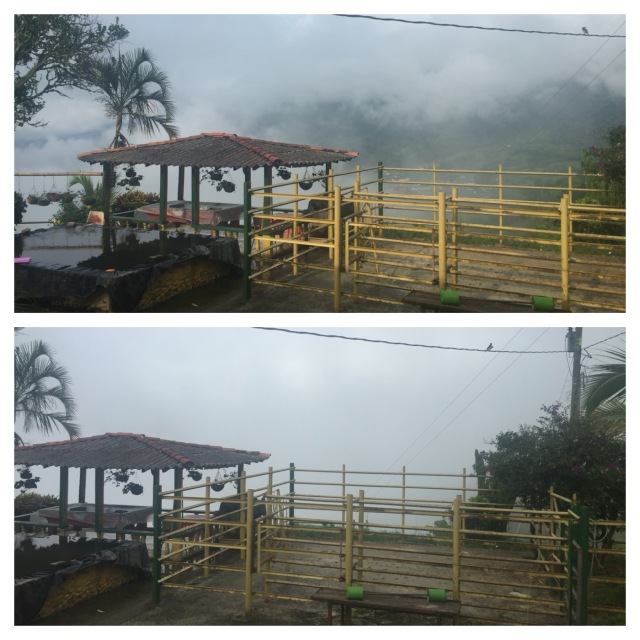 The clouds move in over ten minutes

The bat poo has the bathroom basin growing into a garden! 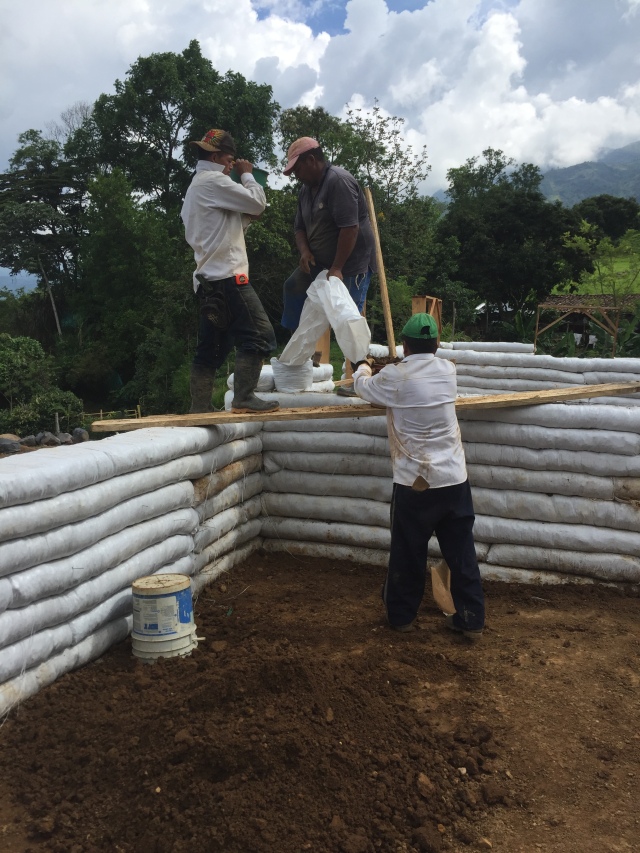 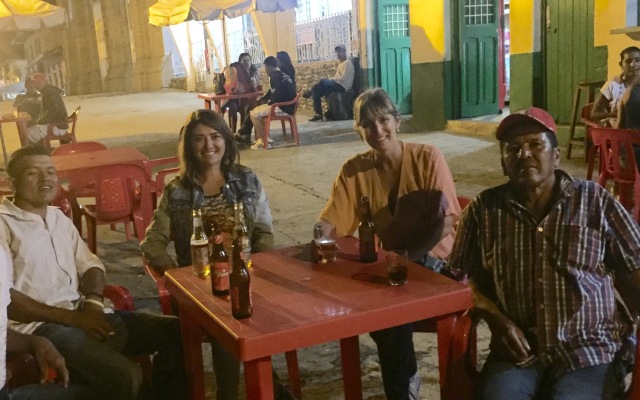 Out for drinks with the work crew

The exclusive ‘back door bar’ with Juan Nicholas, his son and one of his workers 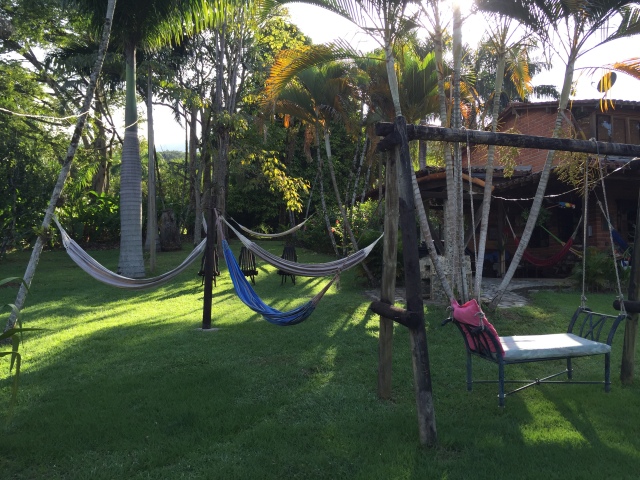 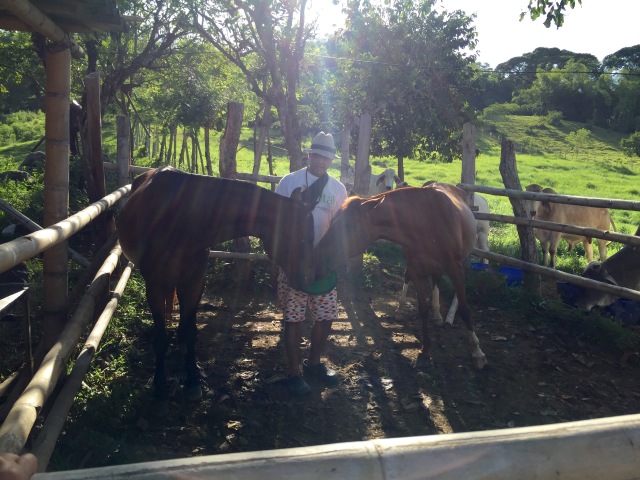 Emilio giving his horses a treat of honey