La Aussie Gringa en Colombia – getting to the point of it!

Off I went on my trip to La Guajira Peninsula. I thought I’d opt for the AUD$8 option of the bus to the airport rather than the $40 option. A bit of a mistake as I cut it a bit fine because the bus took an hour and a half as opposed to the 45 minute option in a taxi but thankfully I got there on time!

I was quickly reminded of the nature of the sultry Caribbean coast when I arrived into Santa Marta. Hot, hot, hot!

I found my way to the collectivo stop for Minca after many stops for directions to confirm I was understanding their directions correctly. I was lucky enough to sit next to Josh, from the west coast of USA, who shared his stories of the sharman rituals he’d undertaken. They had obviously also told him it was a sin to wash his body or clothes … very smelly; but a great story teller for such a young age!

I found my way up to Casa Loma and discovered on arrival that a ‘loma’ is a hill, which explained the challenging walk to it!

I bumped into Josh again in the Minca mercado and he gave me some tips on what to see and do.

I opted to visit Pozo Azul. It was quite serene with very few tourists and cool water to overcome the last hour of uphill walking! I stopped at a little shop en-route back to the hostel to enjoy a smoothie and some tea cake…I declined the hash cookie that had been left for me!!!

That night was spent chatting with a range of tourists. A few from France, Germany, England, Uruguay, The Netherlands and an assortment of other countries. Great that so many had or were planning a trip to Australia; one couple had already hitchhiked a couple of years ago between Brisbane and Port Douglas woofing along the way. Was nice to chat with a young German woman who’d had an internship with the CSIRO while she lived in West End! Small world!

Next day it was off to Riohacha via Santa Marta for the bus. I didn’t have a clue where to get out of the collectivo to get the public bus to the terminal but as luck would have it one of the young women in my collectivo piped up and said (at least that’s how it sounded to me) that she was going there also so would help me get there. Thank goodness she did as the public bus stop to it was not marked at all and the terminal was hidden behind an unmarked fence! She then found the bus I needed and ensured I had my ticket before she found her bus. A constant story of the helpfulness of Colombians.

I arrived at Riohacha passing towns with plenty of the Sierra Nevada natives with their white garb – I remember trying to catch photos of them in 2013. Still as difficult!

After an afternoon chilling by the water with a few beers and a shoulder and foot massage I hit the sack for the early morning departure to La Guajira Peninsular – this was what I had made the journey for.

I’d heard the peninsula was quite dry but that hadn’t prepare me for what I saw over the following three days. Our first stop was the salt production area along the coast before heading into Uribia to fill the 4WD and pick up some bags of water for the people living on the peninsula (a tip I’d received from the hostel owner). We had a lovely group (Maryline from France, Francois from Belgium, Sandra from Poland/Scotland and Juliette and Laurent from Switzerland).

We then went on into Wayuu territory, which reminded me a lot of Tanzania and Kenya with the contrast that this place was surrounded by water. It was quite a surprise to encounter the Wayuu people holding ropes along the road to ask for something … enter the purpose of the water bags! Although our guide discouraged us passing them over yet as he said the more northern area was in more desperate need being so far from a city.

A stop in Cabo de la Vela showed us the salt production area and the spot where all the keen kitesurfers head for the winds off the coast.

It was then on further up the peninsula for a couple of beach spots and a lovely sunset. Not many visitors to this part of the world – about 10 4WD tours enter the peninsula a day. Needless to say it was a quiet night. So after a bucket shower it was off to bed in a hammock with the sound of the waves lapping the beach.

I awoke having been attacked by sandflies ….. of course! No repellant was going to keep these babies at bay!

Today we were heading to the upper La Guajira. We drove for hours across sandy desert. I must admit I wasn’t feeling great about being out there without a convoy of cars given how few take the paths. We went through a couple of sand storms whereby our driver Rubén couldn’t see in front of him ….but he just kept going rather than stop in the soft sand. We finally reached Taracoa Dunas where some of our crew took a dip. It was super windy on the high dunes so wasn’t really enticing me to take the walk up from the water getting crumbed in sand along the way!

Our final stop before lunch was Punta Gallinas. This was the northern most tip of South America. A very different look to the frosty town of Ushaia!

After lunch we caught a boat to a flock of flamingos before settling on a beach to watch another beautiful sunset.

I decided to take advantage of the lobster on offer for dinner. It was such a contrast, poverty all around us and then here I was with the luxury of lobster! We also tried the cactus fruit that we’d bought off one of the women along our route.

The night’s shower was not quite as refreshing as the night before – nothing pleasant about showering in salty water!  I couldn’t face a hammock and sandflies again so took the option of paying for a bed in a ‘room’ … but alas that didn’t stop the insects finding me!

Our last day back entailed taking a boat to meet our driver who’d driven the car a couple of hours to the beach spot to reduce the travel time back to Riohacha.

I had really enjoyed the experience of visiting La Guajira but I was feeling really relieved they’d only had the three day tour available for my dates rather than the four that I’d wanted. The conditions had been tough for this insect sensitive traveller!

I spent my last night in Riohacha chatting with 23 year old brainiac Ferry, a physicist from Germany, who’s currently working on research associated with neurologic responses through artificial intelligence. I was shocked by some of the things he told me had been discovered in recent years!  Look out world – things are about to get heavy!

My last night of the little trip was spent in Rodadero, a pueblito of Santa Marta. I shouted myself to a massage before taking in the sunset.

On arrival into Medellin I asked a couple of girls at the airport if they were interested in sharing a taxi into the city. Funnily enough they turned out to be teachers from Melbourne.  They were heading to Costa Rica and Cuba do I offered to send them on my travel tips.

The windy trip back to Palermo was quite funny. One of the guys from Palermo had jumped on part way along and we’d said the usual greetings. We stopped in La Pintada for a toilet and food break. We were about to take off when I asked the driver to stop because my mate from Palermo wasn’t on and his bags were still on the seat. Once he was back on board we started to take off and then an old guy who was sitting on the opposite side to me piped up and asked the driver to stop pointing at the spot I’d been sitting in earlier but had to move from when new passengers took my spot. I quickly realised he was expressing concern about my absence and let him and the driver know I was still on board … gorgeous Colombians!

Minca from the ‘loma’ 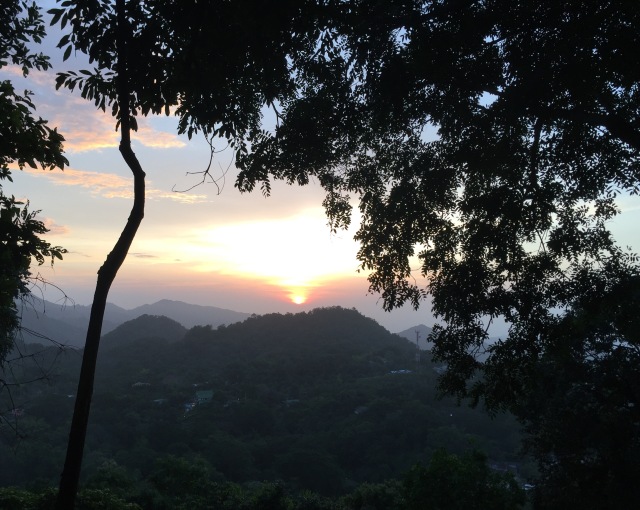 Heading into the lower La Guajira 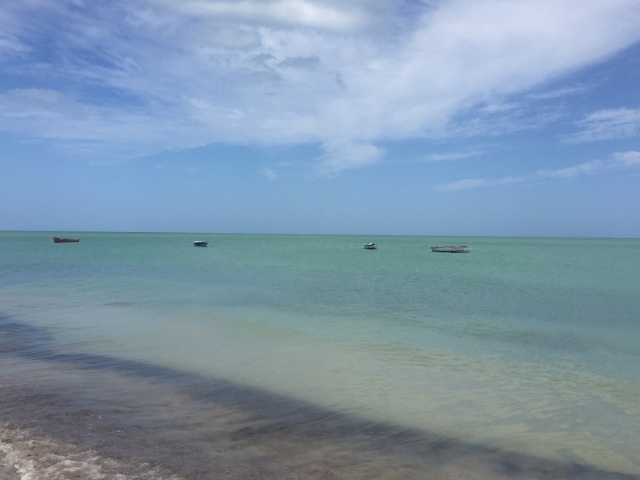 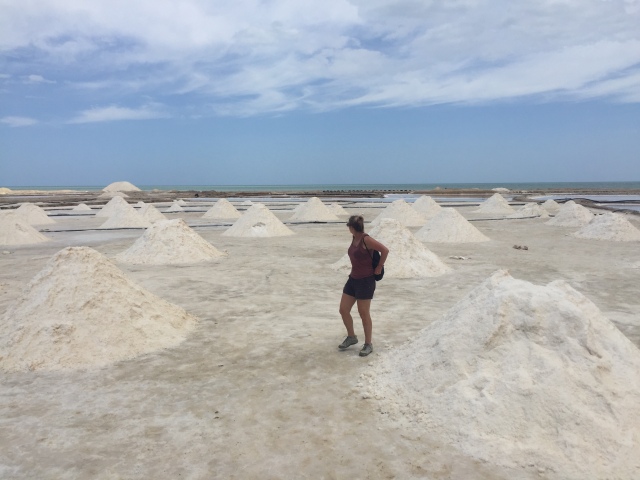 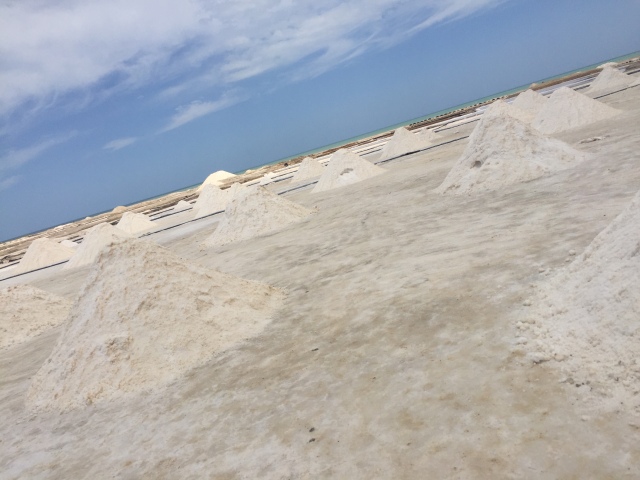 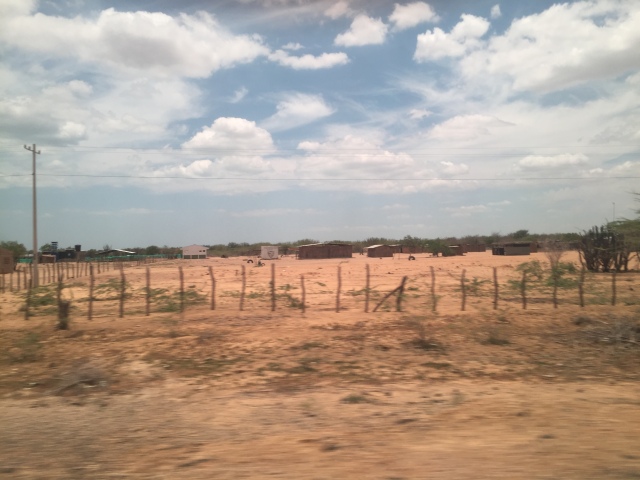 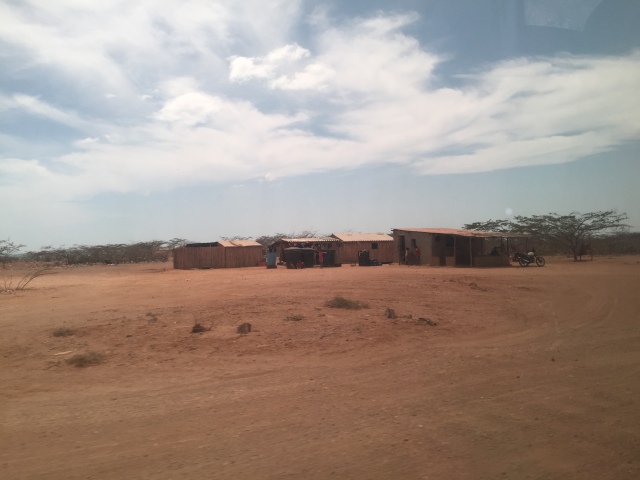 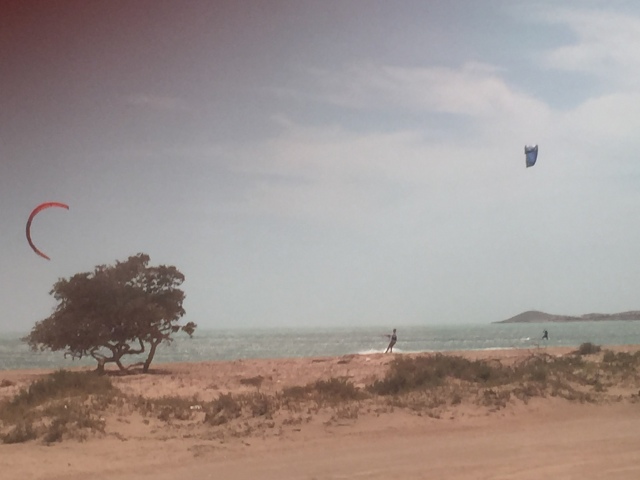 The kitesurfers taking advantage of the windy conditions 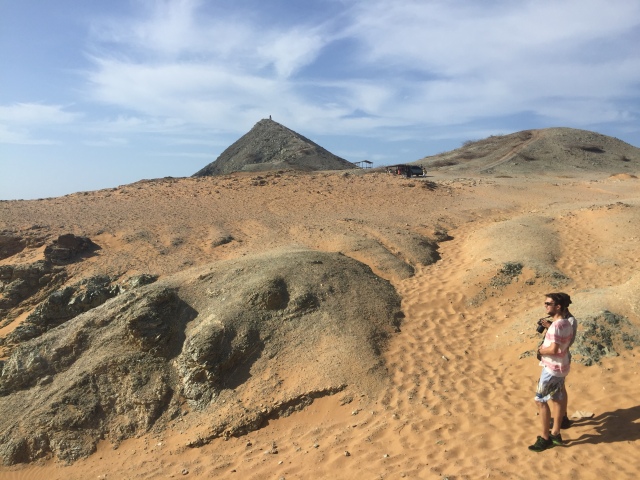 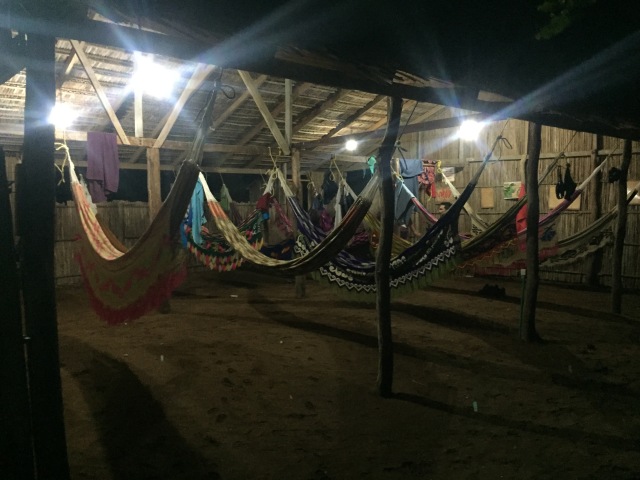 Home for the night in Cabo de la Vela 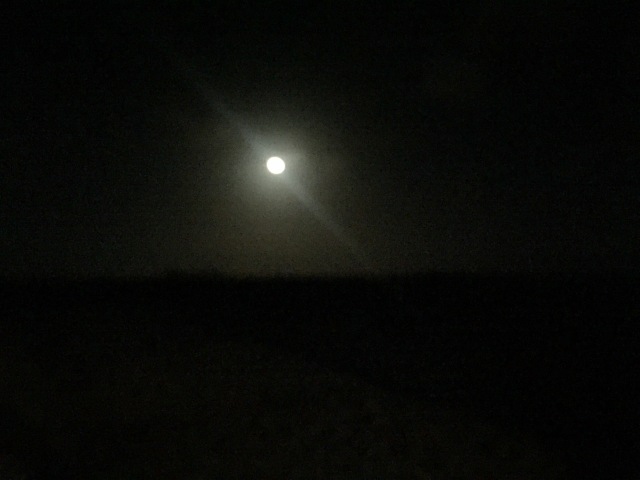 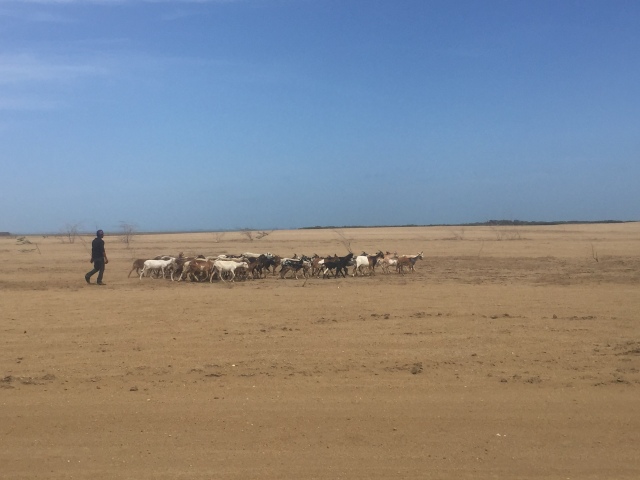 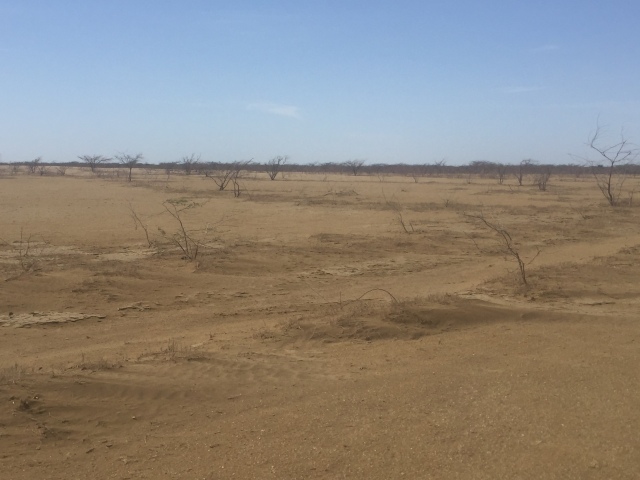 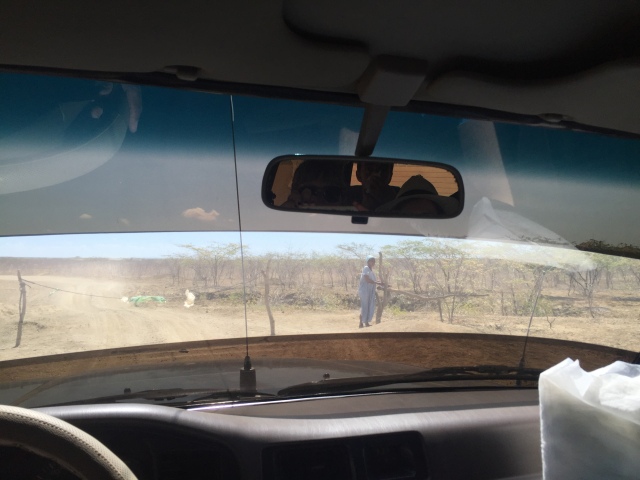 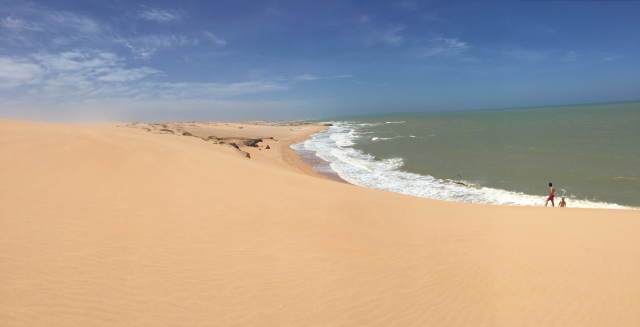 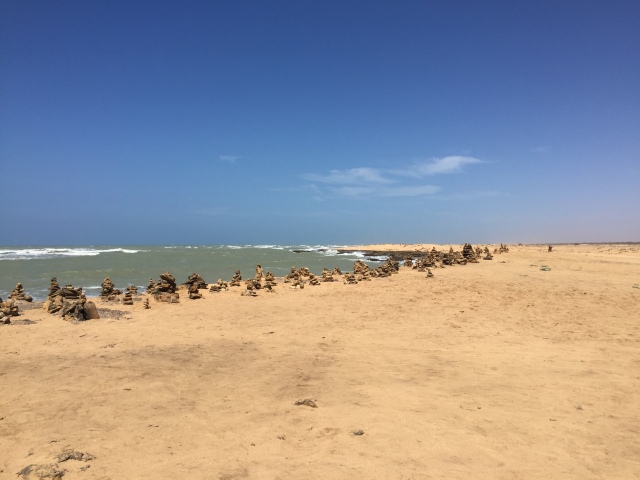 Flamingos in the upper La Guajira 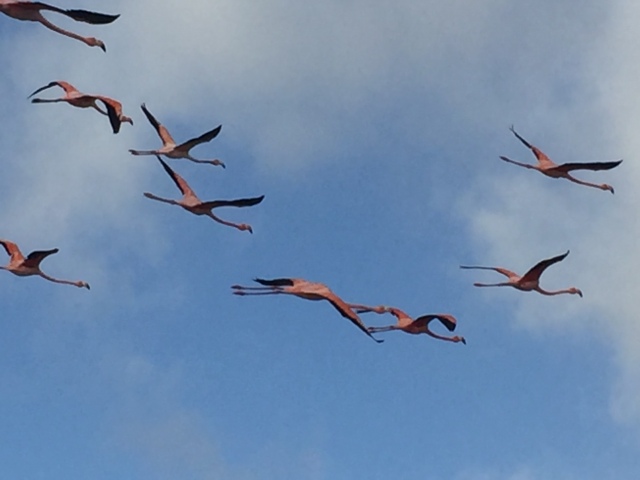 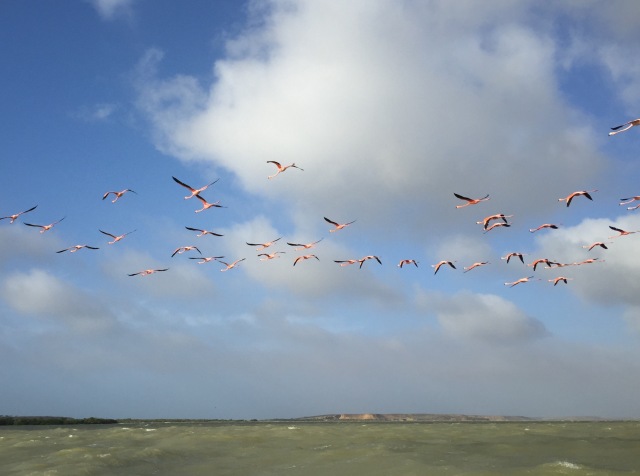 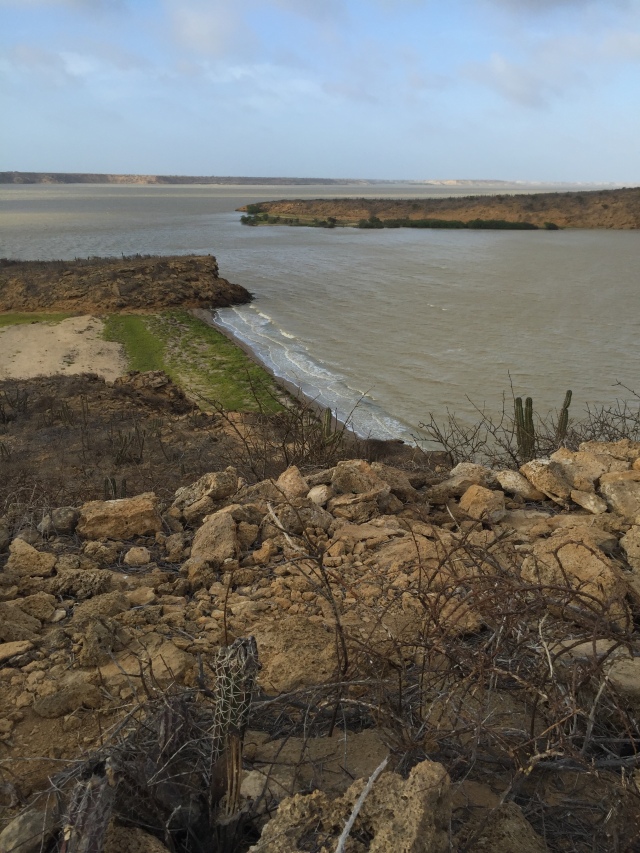 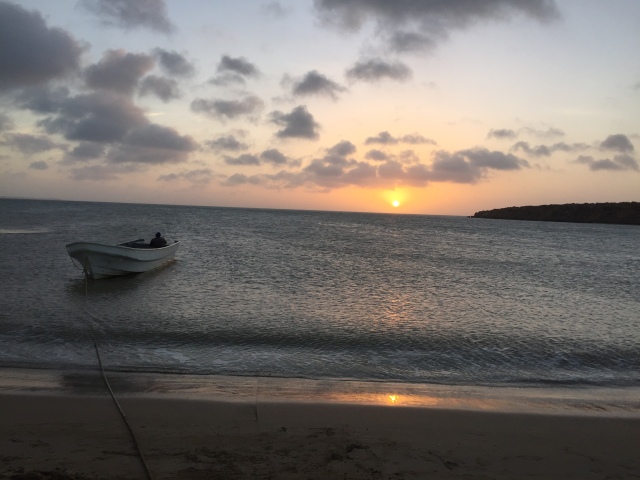 Feeling a little self-indulgent given the poverty around me! 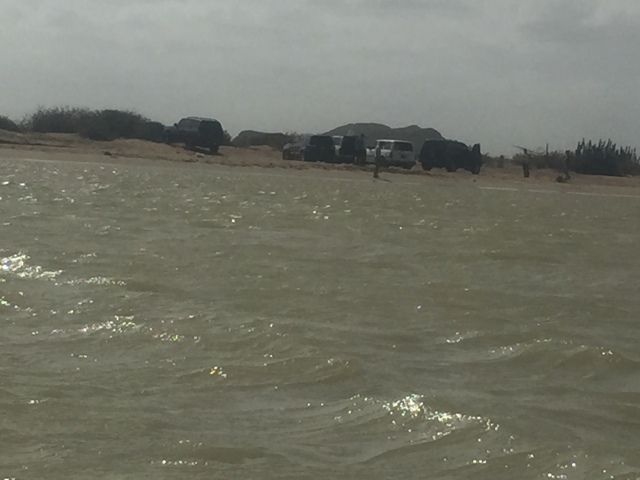 Rubén awaiting our arrival for the trip back to Riohacha

The butcher shop in Uribia – Rubén picked some up some goat for one of his Wayuu wives and their kids.  Dropped it off on our way back to Riohacha! 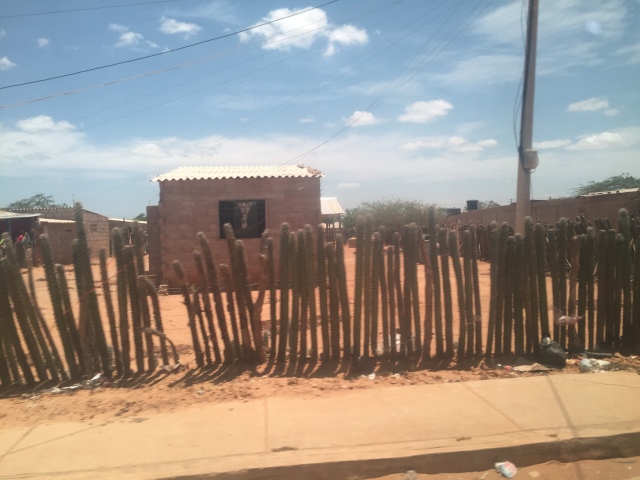 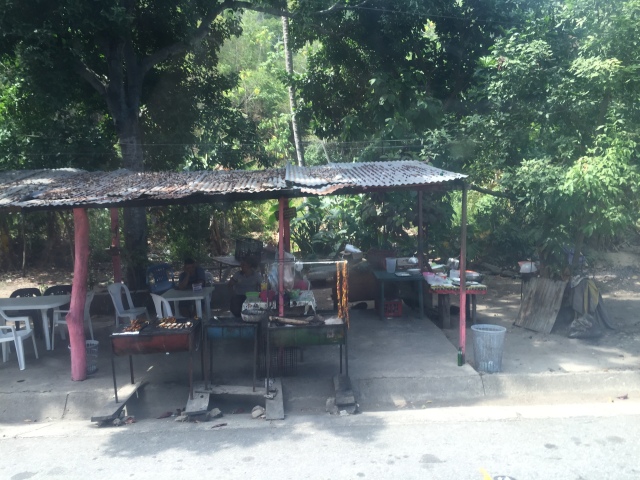 Bussing it back down to Santa Marta 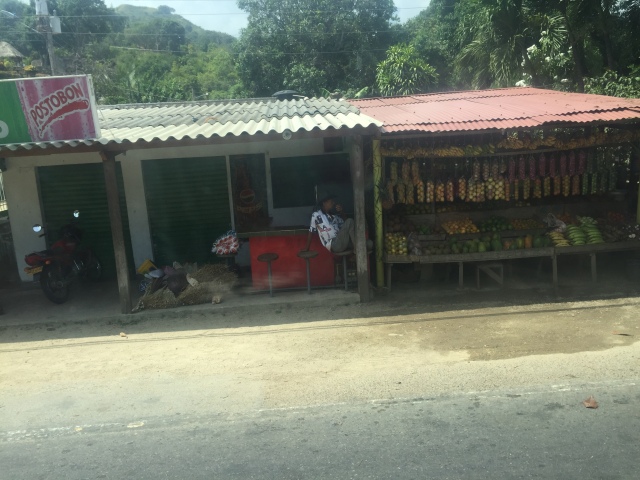 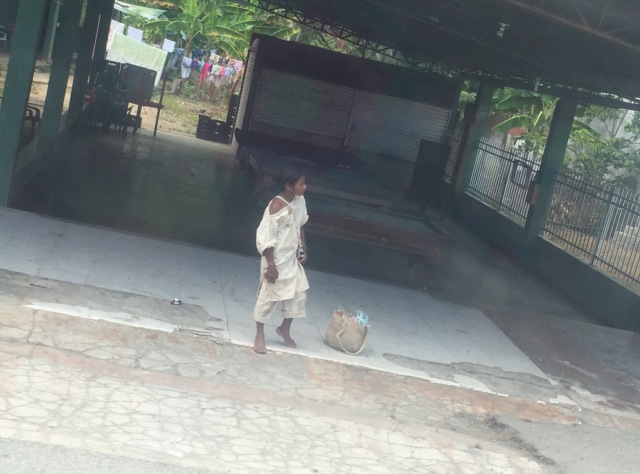 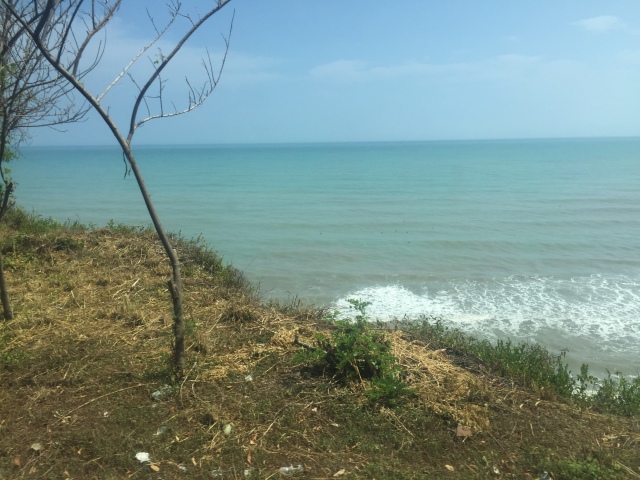 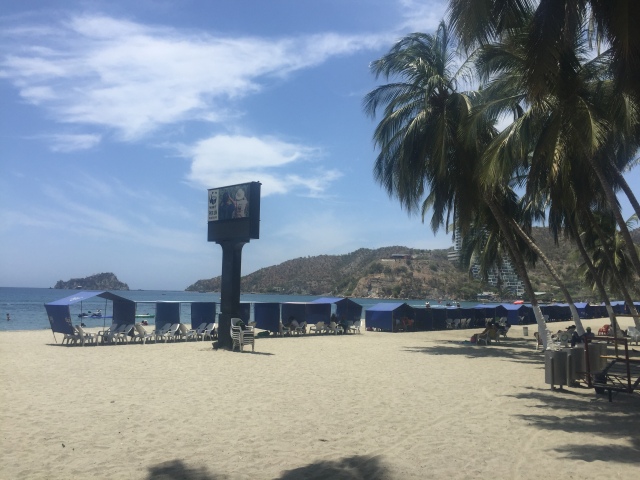 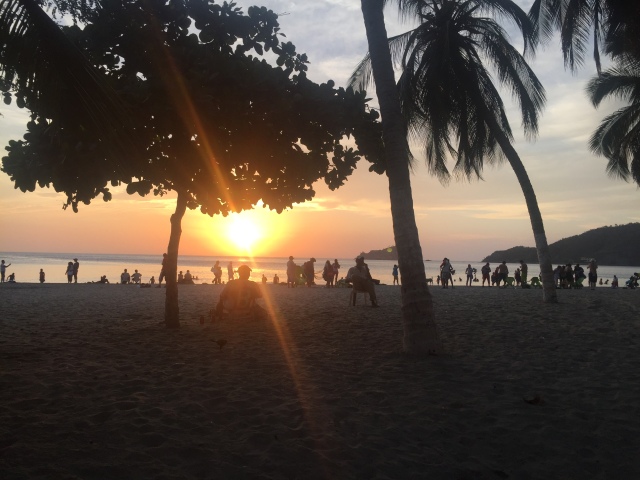 Come 6pm and the police 4WD moves along the beach instructing everyone to leave the beach! 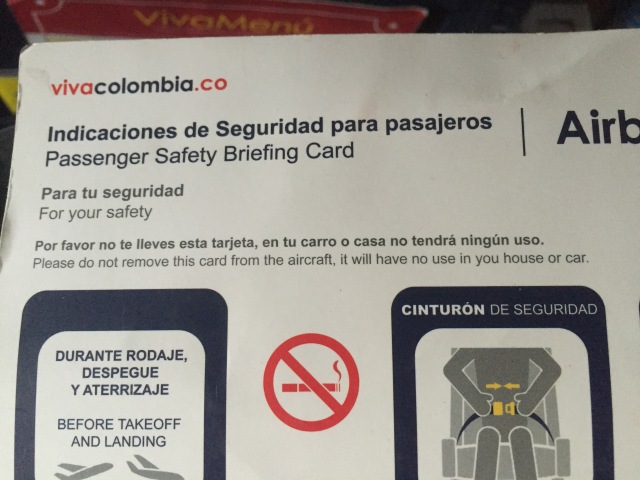 Just in case anyone is thinking of taging the card for his/her coffee table! 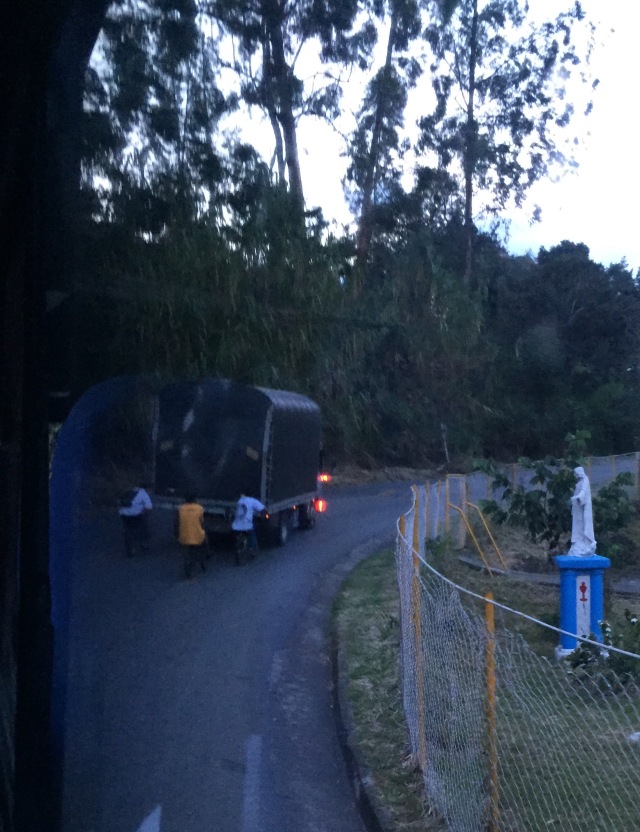 The trip back to Palermo always gives me a laugh – push bike riders hitching a pull from this truck!