La Aussie Gringa in Colombia – it’s in the bag!

Back in Palermo after my little trip away. The visit to the Acaime hummingbird sanctuary had cemented my desire to commission a painting from Tato. Birds are his specialty so we negotiated a deal over a few drinks on Friday night. He was excited by the prospect of the commission (and no doubt the money for food … just like all struggling professional artists).

Work had started on the house on what was a very wet Tuesday in the week of my return to Palermo.

A visit to the block on the Saturday resulted in some introductions to Juan Pablo’s team. There were two guys – Negro (I was secretly and unrealistically hoping the nickname was based on his surname being ‘Black’) and Jaime (a young guy who happened to live in the house across the Las Delicias road from Paula’s block).

Paula had decided not to do any further excavation at the site and to go with the original planned position of the house (although it had to be moved a bit to fit so ended up over a very large rock). She had also changed her mind on the construction material deciding to now go with the two level four bedroom, five bathroom house in earthbag construction.

The work so far had consisted of digging some foundations, locating and connecting the two water tanks, which were fed from a spring on Paula’s brother’s property, and constructing the front retaining wall (supporting the house’s front corridor).

The local pyrotechnic had been brought in to blow up the big rock that had to go to make way for foundations and the slab. He’d had a go with three sticks of dynamite and then the guys had chipped away at it with their rudimentary tools (picks and crowbars) but it was clearly not sufficiently cleared for the slab and foundation levels. More dynamite would be required.

It was a cruisy weekend back in Palermo. A lovely early Saturday evening dinner at Las Palmas (Alejandra and Nelson’s restaurant). They had just had an area beside the restaurant cut for the construction of holiday accommodation. I found out later the plan is for eight ensuited bedrooms. They had told me when I had my first meal at Las Palmas that they constantly get asked if they have accommodation available for guests…so they are attempting to meet the market demand.

Sunday was spent in Tamesis. I got a well needed fringe trim, a hair wash and partial blow dry for 6,000 pesos (AUD $3.00)! On a wander past Hilton’s place he invited us in to show us his eclectic collection of stuff – hand crafted furniture and lamps. He thought I’d make a good sales assistant for his fruit kiosk out the front so asked me to do a work trial. I obliged and got some good feedback from the passing locals…my new vocation? “Aguacate, aguacate … delicias aguacate!”

We lunched in our favourite spot for the usual menu of the day – fish, salad, rice, beans and fruit juice (all for a killer AUD $4) – and then finished the day with the grocery shopping before waiting for a full collectivo taxi to head back to Palermo. The taxi trip costs 12,000 pesos ($6) and you share the cost between the number of passengers – any extras over four passengers means an extra 3,000 for the driver – so, the poor person in the front seat gets to share it with a fellow passenger. Thankfully, I’d yet to have that pleasure!

Paula was mainly staying in Palermo now because of the early starts at the site. I knew I wouldn’t be getting there at 6:30am no matter how close I stayed to the site so I decided to stay up at Las Delicias.

Paula returned to the house while I was getting my stuff ready to inform me that the kids had been asking again when I was going to do English lessons so she has gone with them to the library and booked me in for a class on Friday afternoon. Looked like my vocation was changing once again!

I arranged for Popo to pick me up in his Moto carro (tuk tuk). It was looking like it would be a very social trip as we picked up his father and his nephew and headed out of the Palermo centre. I soon realised the motive behind the extra passengers. The moto carro really struggled up some of the inclines of the road to Las Delicias because the ground was quite wet from recent rain, which resulted in a fair degree of slippage on the moto carro’s front tyre (which travelled on the middle grass/rock strip). No problem when you have dad and your nephew in the car – they just get out and push you up the hill! 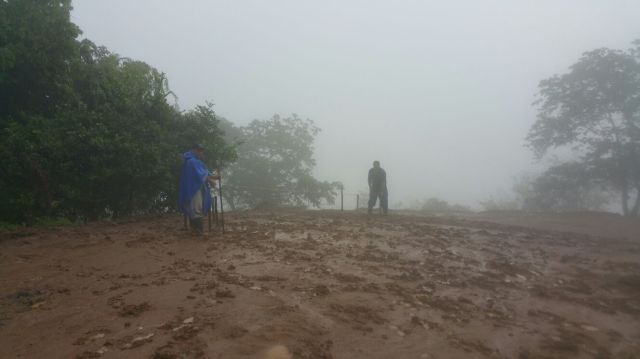 First day of the job…just a tad wet and misty! 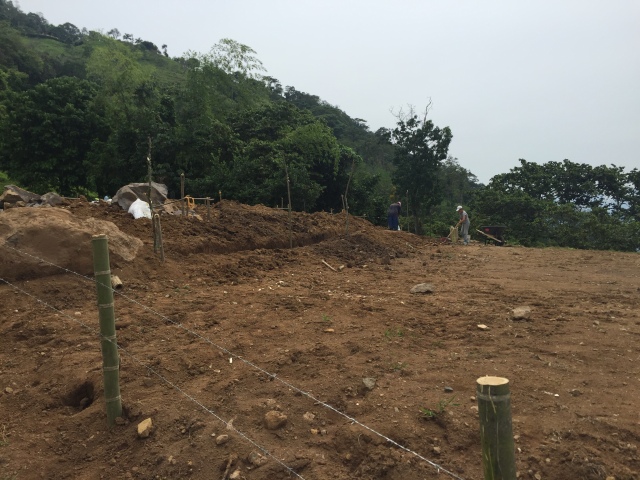 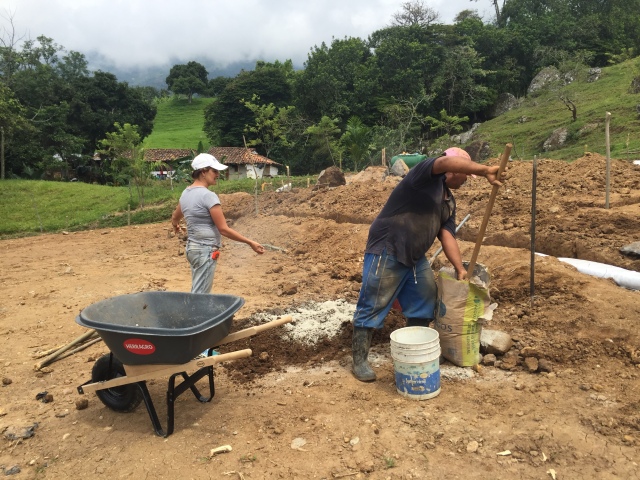 Negro getting his back into the concrete, soil and water mixing

Negro’s dog, Nino, hard at it! 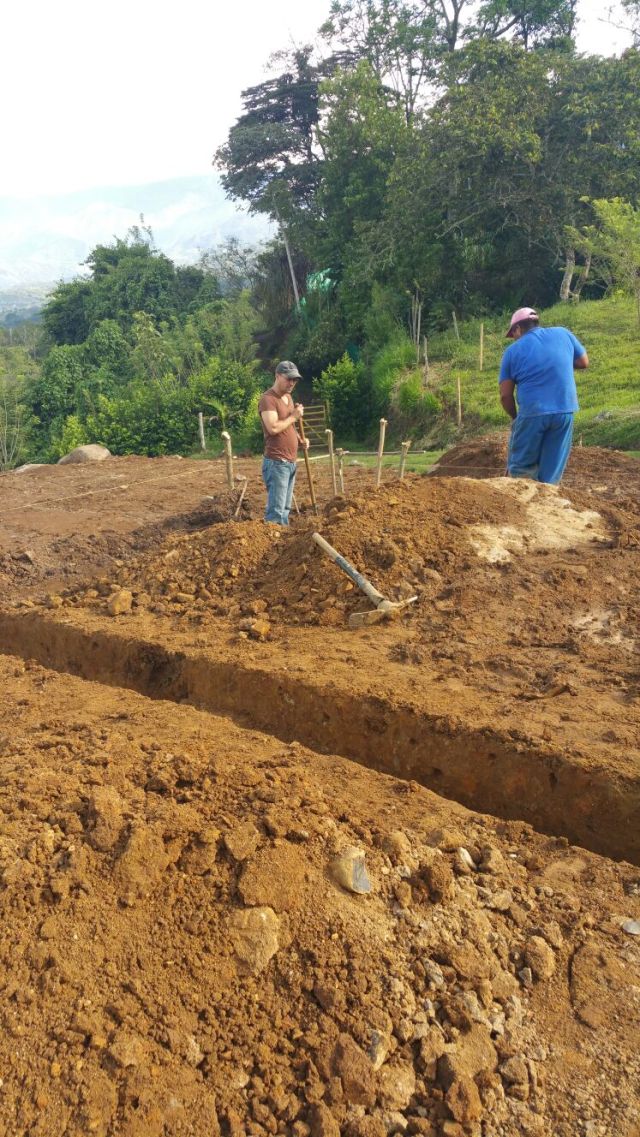 The deal is done…4 months to deliver my colibres!

Ever the serious artist –  posing in front of a commission underway for Paula’s sister, Omaira 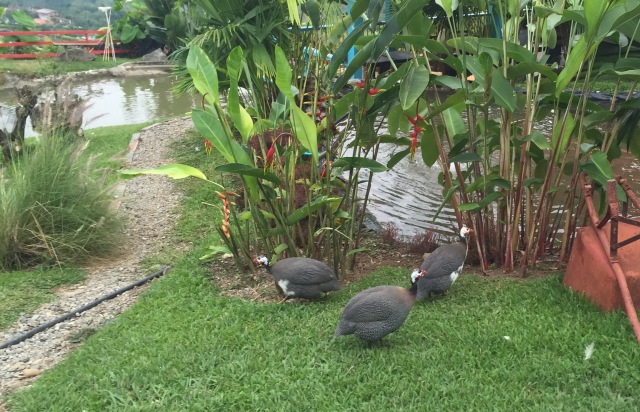 Enjoying the serenity at Las Palmas 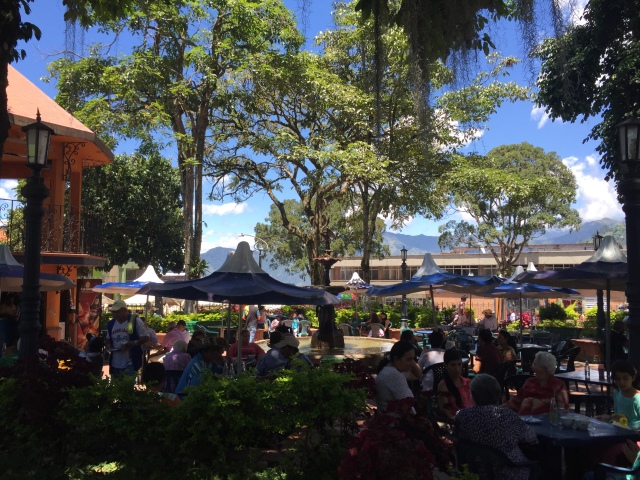 Getting in on the Sunday groove in the Tamesis Plaza Parque

Hilton gives me a trial for a fruit kiosk assistant job

Delivery day for the Tamesis supermarket…not quite the branding of Coles or Woolies!

Off to Las Delicias in Popo’s tuk tuk