The hike out of Cabane de Moiry was a little scary for me first up – it was the zigzag in reverse – weirdly I felt better going up than facing down hill on those corners. There were some groups of about 10 leaving at around the same time as us so any chance of serenity while hiking down beside the glacier was gone. I did however enjoy the guide’s stories about how much Australians love to party – he was recounting a fire alarm experience from when he last visited Sydney. He was clueless he had two Aussies in front of him!

The walk across towards the col was spectacular with the Lac de Moiry coming into view after not too long. The clouds were pretty spectacular that day. We felt a bit bad bumping into some amorous cows!

We shared the path for a while with a group of Welsh guys – I was glad it was on an undulated part as I couldn’t have answered all Dai’s questions on an uphill to a col! I had missed Karyn take a slide while on the path but both she and a spectator indicated it was pretty impressive! Thankfully she reported no serious damage – ‘just’ a bloody knee!

We saw some of the other hikers on the lower trail – my heart stopped momentarily with the thought we were on the wrong trail but as Steve and Cassie started to go cross country to join us I was relieved it wasn’t going to be a Groundhog Day!

The uphill to the col was tough. It took a lot to call on our quote to convince me to enjoy the uphills – the long hike the day before had really taken it out of us.

I saw some guys come over a ridge – Gerry later pointed out they were marmut shooters. I had no idea in the end if he was pulling my leg or was for real. I had hoped the former!

We reached the top of the Col – I was wishing I hadn’t left my broomstick in La Sage!

The weather at the top was reasonably mild so we chose it as our picnic spot before we made the hike down to Zinal.

A good part of the walk down was done on the ski piste but we soon started to make our way down through pastures and the woods. Gerry had chosen to join us in the hope our notes gave us an upper edge on Charlie and Sooni who had taken the much less pleasant option of the road down to Zinal. I nearly took us down there too with an oversight while reading the notes.

From there Karyn thought it proper to call out ‘way mark’ whenever she saw one. As it happens they were fairly commonplace in this area so she ended up sounding like one of those seagulls scrounging for chips!

The walk down was lovely although quite steep and challenging through the roots on the paths in the woods. We got to some pretty average bridges, which of course Gerry felt it necessary to shake while I was on. He felt pretty happy letting Charlie and Sooni know that he’d hitched a ride down on our broomsticks!

I was absolutely surprised when Karyn said ‘look its Keith’. He’d come to Zinal hoping to catch up with some of us before he moved onto Zermatt. It was so wonderful to see him again.

Before dinner Karyn and I made a few calls to our hiking agent in London trying to get more info to decide if we would proceed with doing the Europaweg leg. We’d just read the notes after hearing others talking of its challenges. I was concerned about the amount of exposure along the paths and Karyn was concerned about the climbs needed to reach the hut (there were two detours presently in operation). We finished undecided with the thought we would keep talking about it.

The three musketeers had finished their hike in Zinal so we took the opportunity to all gather for a farewell dinner. Gerry kept insisting on buying me beers. I was unsure if he just wanted someone to drink with or he wanted to see me hungover for a hike he knew he didn’t have to do! Clearly doesn’t know me too well.

Charlie had brought his his hiking book down to dinner, which described the Europaweg as a white knuckle ride – that pretty much sealed for me that the only option I would be considering was the one to go up from Randa. It too sounded positively back breaking! We still had a couple of days to decide…. 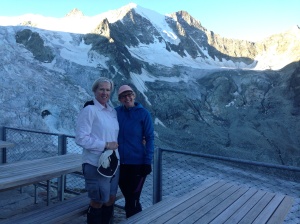 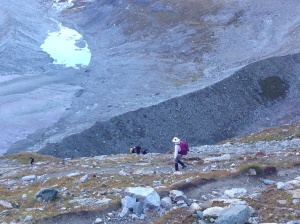 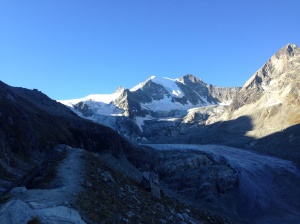 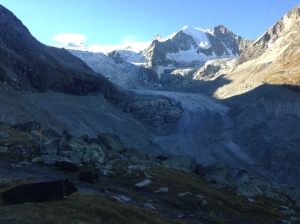 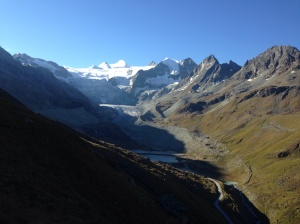 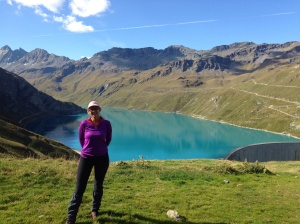 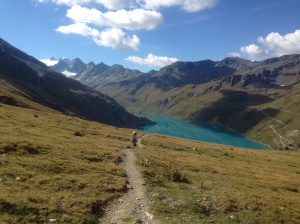 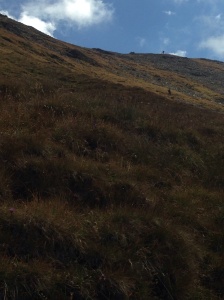 We too will get there! 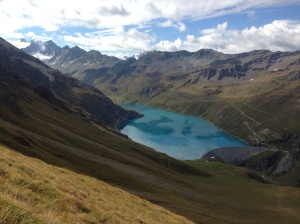 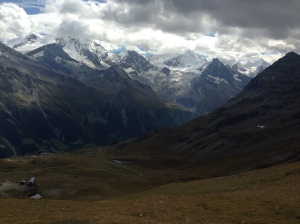 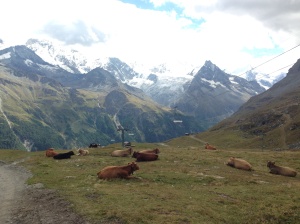 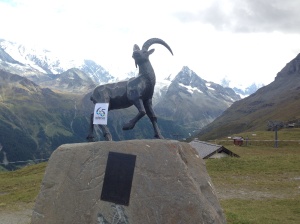