Stage 2 – Argentiere to Trient – thems dragons in these mountains!

Farewell to Argentiere and the lovely views of the glaciers.

It was lovely to hear the bubbling brooks and chirping birds as we made our climb towards Arguillette des Rossettes.

A little animal scurried off in front, we concluded it was likely our first Marmut.

We arrived into a cute little place with campers and were unsure if we should be crossing the bridge or walking ahead. This was our first lesson that sometimes it pays to walk a little further (even though neither of us wanted to hadpve to walk more than necessary) – a few steps and there was the sign we spent five minutes wondering if we were close to it.

As we exited this lovely little hamlet of Tre-Le-Champ we spotted some totem poles – it took me back to Easter Island.

Karyn had been telling me since we started walking how we were likely to come across wild blueberries. As we sauntered up one hill I heard from the rear “I see blueberries. I see more. Oh I see lots!”. “No Karyn, not more food poisoning”. Karyn’s a little more adventurous than me choosing to have a feast but thankfully with no side effects.

High into the hills we spotted people with bags collecting something from the ground. An emu parade perhaps? No, turns out the Swiss will go to quite a bit of trouble to collect mushrooms. I had my suspicions that the younger coupled were looking for gold tops!

We were moving into the cloud cover and the clouds wee moving at an incredible pace but thankfully the sun was still peaking out to help the mineral I the rocks glisten.

We were very excited to reach our first peak – Aiguillette des Rosettes – it was like being on the top of the world. I’d had a couple of gasps getting there given the drops from our path approaching the peak but had done it without tears so far.

Unfortunately the views down to the Chamonix wee momentary thanks to the clouds swirling at an amazing pace but we still had views of a number of mountain glaciers.

As we headed down to the Col (‘col’ being a pass) we had a “The hills are alive with the sound of music, la, la, la, with songs…”. As we walked a few steps we found a bunch of female hikers having a rest in the grass who would obviously enjoyed/endured our rendition!

We then had a short uphill to the ski cable car station (that’s how high we were) before traversing down to Col de Balme – actually felt I could have got up a it of a jog.

This was the border crossing into Switzerland so we decided to head for the refuge at the col for a hot drink. As we walked in with our best “Bonjour” we encountered what I would later describe as a witch (Karyn preferred dragon lady). She yelled at us in French, we couldn’t work out if she wanted us to take off our packs or shut the door so we walked out. She slammed the door behind us. Once over the shock Karyn realised she wanted us to close the door – which was open when we arrived!

We were now into the homeward stretch. It was all down hill at a pretty steep gradient and my knees were feeling it. Any idea of jogging had well passed.

We arrived into Trient with the glacier spilling down the surrounding mountains. Our notes had us heading for Nante Noir and the only black thing I could see were the cows in the distance. Of course I was way off with Nante being the river!

On arriving at the auberge we thought we were being told to put our luggage in the garage. We were somewhat puzzled but compliantly made our way to the garage. In the garage we found only bags for those who were doing assisted hikes (their bags being taken ahead for them by either car or donkey). We had a laugh when we realised why she had looked at us funny when we asked if we could take bags of clothes and toiletries to our room – ahh language barriers.

This was our first night in Switzerland and I was wrapped when we were served a tomatoe fondue. A an extra twist we got ice cream that had the Swiss cross running though it.

We reflected on the day – it had taken us an extra hour and a half than what our notes had indicated it would. I was expecting to wake a bit sore and tomorrow’s hike was a black grade so it was an early night for us if we wanted to arrive at Champex at a reasonable time.

We went off to sleep with the rain falling outside and a very cool 5 degrees. No need to worry, it doesn’t rain when I hike!

Revisiting the Moai from Easter Island!

Are you sure Karyn? We could take the shortcut straight to the Col!

Chamonix disappearing behind the clouds.

Perfect spot for a pack rest. 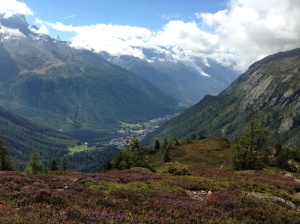 All worth it once we arrive at Aiguillette des Posettes!

Down to the Col before another hike up the hill. 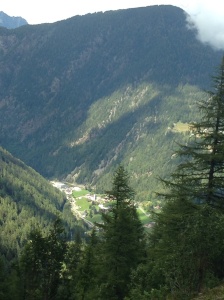 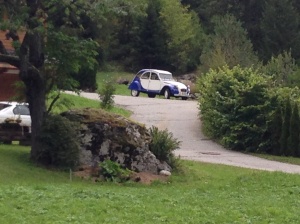 Hello little Citroen – will you fit our packs??? 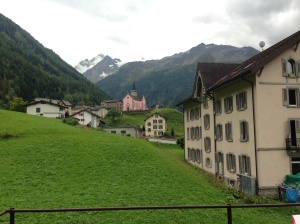